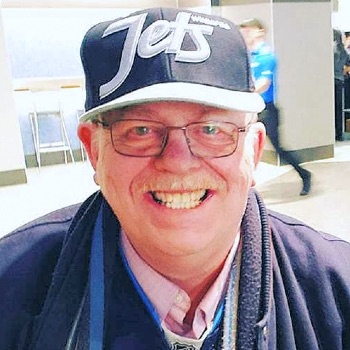 I was born in Winnipeg, Manitoba over 70 years ago and grew up with two sisters who always kept me grounded. After graduating from the University of Winnipeg, I joined the Winnipeg Police Service in 1972. With my wife Terry, we have two girls and one boy. Now, I have 5 ladies to keep me grounded.

While serving on the police force, I met a Christian retired officer named Henry Eckert who led me to the Lord and discipled me for two years. I had a burning desire to share my faith almost right away. In 1985, I attended a week-long Hockey Camp with Hockey Ministries as a counsellor. By the end of the week, 9 young attendees gave their lives to Jesus. I was so inspired by God's work! Norm Brown, who eventually joined Digital Strategies and was the Director of the Hockey Camp at the time, also became one of my mentors.

In 1996, I began to work with Christian soccer coaches from Athletes in Action (AIA). I served as a police supervisor of more than 25 men and women in the Fort Garry area of Winnipeg for two more years and continued to run camps with AIA. When COVID hit, I decided it was time to leave the camp to a younger supervisor. 2,468 people accepted the Lord out of our ministry.

When Norm Brown had joined Digital Strategies some years ago, I remember him telling me about the ministry. It was able to reach out digitally to people from around the world for Christ. That thought captivated me. So, at the end of my AIA Camping Career of 25 years, I now serve with Digital Strategies. I have already seen a couple of people accept the Lord and I've only just begun. How exciting is that!